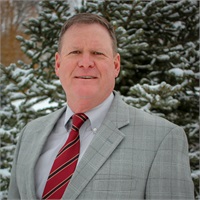 Dan Ritter, CFP®, has been assisting clients and other professionals since 2007 after serving in the United States Marine Corps for 23 years. He has a BA in Social Science from Cal State San Marcos. Dan received his CFP® Certification in 2015 after completing extensive training, experience requirements, and rigorous ethical standards. Dan understands the complexities of the changing financial climate and knows how to make financial planning recommendations. In 2019, Dan partnered with Mike to form Core Wealth and they opened their own personal branch office in an effort to provide the highest level of customer service possible through more defined roles and a deeper level of knowledge.

Dan is married to Patricia, teacher at Longfellow Elementary School, and has 2 children and 3 grandchildren. He enjoys spending time with his family, golfing, fishing, and shooting. Dan serves on the American Legion Post 14 Board of Directors. He is also the Vice Commandant of the Northwest Division Marine Corps League and is a very active volunteer in the community.